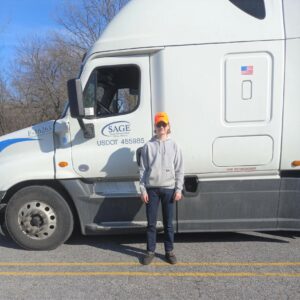 As a recent college graduate, Zach was looking for training programs that not only appealed to him but also offered job advancement opportunities. He attended Word of Life Bible Institute and received a two-year certificate, which he planned to use to help his local church and his community. He wanted to do more, however, so he researched other fields that would work well with the certificate he already had.

He finally decided to pursue a Commercial Driver’s License (CDL), as his grandfather, father, and numerous friends and family members had worked as truck drivers. A CDL license would allow him to help people move in and out of homes and apartments, take local and on-the-road jobs, and be home on the weekends to serve in his church.

Through his church, Zach learned about IU13 Community Education and reached out to start the licensing process. IU13 staff enrolled him in CDL training, providing the necessary resources. “The people I worked with along the way have been greatly helpful and supportive of me from start to finish,” Zach said. “IU13 allowed me to get the training necessary to pursue my desired careers.”

Zach completed an entry-level driver training course in March 2022 and is now the proud holder of a Class A Commercial Driver’s License.

Watum Njangu was born in the Democratic Republic of Congo. In 2003, his parents moved to Uganda because of war. As a refugee, he faced many challenges, including lack of education.

When he came to the United States in 2018, he joined an English as a Second Language (ESL) class to improve his English. After a year of ESL instruction, Watum transitioned into high school equivalency classes and earned his GED in June 2021. During that time, he connected with staff at CareerLink for assistance finding employment and learning about training opportunities.

Today, Watum works at Lancaster General Health and hopes his story will encourage anyone who’s interested in learning English to reach out to IU13. 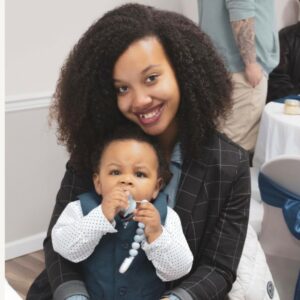 Raising her son, taking care of her disabled sister, and more!

Felicia connected to the Lebanon Youth Program because her sister was a participant at that time.  Felicia currently has a 21 month old son and is due with her second child.  Felicia currently supports her family by working at InstaCart as a personal shopper, so she can choose her jobs and hours.

“Life is too short,” Felicia said, “so if there’s an opportunity, take it; you may not know what tomorrow brings.”

She became interested in the medical field after attending her mother’s doctor appointments with her before she passed. Her career goal is to become an EKG Technician.  Felicia started the MedCerts EKG course on February 10 and successfully completed it on May 5, 2022. She is currently preparing to complete the clinical component (hopefully at Penn State Hershey) and take her certification exam. 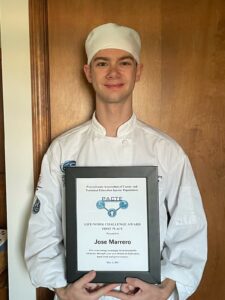 Reaching for his dreams and more!

A recent graduate of Cedar Crest High School and the Lebanon County Career and Technology Center (CTC), Jose Marrero III faced obstacles that could have deterred him, but his gentle disposition, positive attitude, dedication, and perseverance contributed to his ultimate success.

Diagnosed with a disability and given an Individualized Educational Plan (IEP), Jose attended the Cornwall-Lebanon School District for 14 years. During his time at CTC, he enrolled in the Pastry Arts Program while working at McDonald’s and living with a foster family. When living with one foster family, he endured abuse and was ultimately removed from that placement.

A difficult home life and transition to a new home did not deter Jose from his dreams of working in pastry arts/culinary arts. His first step in achieving his goal was through the IU13 Lebanon Youth Program; Jose completed a 90-hour paid work experience at a local sandwich shop. From there, he was approved for a two-week training period at Hiram G. Andrews Center. Shortly after completion of that program, he was hired by the Hotel Hershey as a prep cook. Jose’s response to these trainings and eventual hiring? “I can’t believe all of these things are happening to me!” 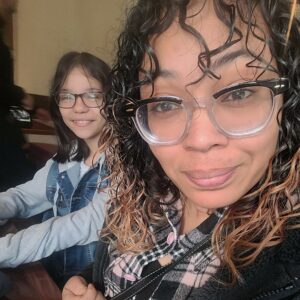 Dropping out of high school, raising kids, and more!

When Elizabeth was 17, she gave birth to her first child. Unable to afford childcare and lacking family support, she dropped out of school to raise her baby.  Elizabeth has struggled to find a job with a sustaining wage that does not require a GED. After the birth of her fourth child, and now working two jobs to keep a roof over their heads, she decided to pursue her education. In 2019, she registered for high school equivalency (HSE) classes with IU13 Community Ed. Within a year, she passed four out of five subject tests, but had three unsuccessful attempts to pass the final exam. Feeling like a failure, Elizabeth became depressed and did not attempt the test again in 2021.

Elizabeth shares, “It was hard battling with everything inside, but with my counselor’s help, I overcame my fear of failing again and in January 2022 made the appointment for my reading test.” Elizabeth took her final test on February 25 and passed. “Hard work pays off,” she said. “But the look on my kids’ faces and my feeling of self-accomplishment is what matters most.” 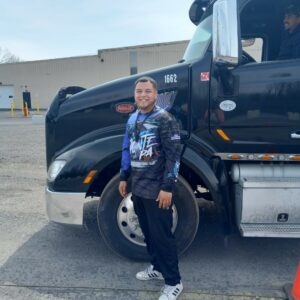 Supporting a baby, girlfriend, and more!

Jean initially contacted the PA CareerLink for Workforce Innovation and Opportunity Act (WIOA) services and was referred to the Lebanon Youth Program due to his age.  Jean has an eight month old daughter and is an English Language Learner.  He resides with his girlfriend and baby, and supports his family through employment at a warehouse.

His career goal WAs to become a truck driver. So, he started his CDL class A training at 160 Driving Academy on March 28, and successfully completed the program on May 18, 2022, earning a Certificate of Completion. Jean received  his CDL License on June 7, 2022.

While Jean was taking the classes, he received ongoing encouragement from his job trainer as well as supportive services to help pay for additional courses and PA Department of Transportation fees. Jean recently obtained employment as a truck driver doing deliveries for Lowes.

Since he passed the GED exams, Jose Santiago has found a higher-paying job, started college coursework, and acquired an unshakeable sense of accomplishment. “I feel so proud of myself,” he says. Though studying for the exam demanded a great deal of time and energy, “It was worth the effort, worth the push.”

In early 2014 Jose joined an IU13 Family Literacy class at Carol B. Winters Head Start Center in Lancaster. It had been 12 years since he dropped out of high school at age 18, but he entered the classroom with a strong and singular motivation – to earn his GED. “I needed to set a goal for myself, and I put nothing ahead of it,” he said.

Jose immediately sensed that his classmates had grown discouraged over the challenges of the GED. Although the new version of the GED, which was launched in 2014, is more rigorous than previous versions, Jose didn’t let that discourage him.

“He motivated other students and pushed them to progress,” said his IU13 instructor, Leesa McAnally. “Jose student a great deal outside of class and would come in with questions for me.”

Jose’s hard work paid off when he passed the GED exam that summer. Shortly afterward he found significantly higher-paying work operating an industrial sewing machine. In an effort to continue his education, Jose also starting taking classes at a local community college.

Passing the GED “opened more than one door,” said Jose, “and they continue to open.” 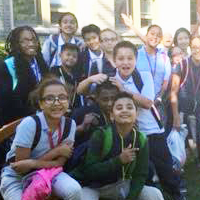 One of the young learners benefiting from IU13 Community Education is 13-year-old Binit.  Since arriving in Lancaster as a refugee in April 2014, Binit has participated in English conversation classes, after-school activities, and a summer educational program.

These services help community members succeed in their roles as workers, family members, and citizens. In the case of young Binit, the investment is paying off. “Binit likes living in the United States,” says his mother, Sipra Gajemir. “It’s good that he’s getting educated. It will help him in the future.” 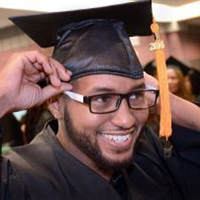